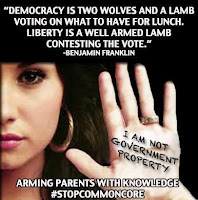 Maine Equal Rights Center in conjunction with No Common Core Maine is holding a press conference on August 21st at noon time in the Hall of Flags announcing a first in the nation campaign.

Portland, ME - The Maine Equal Rights Center to put the Common Core Education standards to referendum for the people of Maine to vote on.

Remarks will be made by coalition speakers including No Common Core Maine co-founder Heidi Sampson who was the first homeschooler in the nation appointed to the State Board of Education by Governor LePage, Erick Bennett, Director of the Maine Equal Rights Center, Jamie Gass who is the Director of the Center for School Reform at Pioneer Institute Public Policy Research headquartered in Boston and Maine state law maker Ellie Espling of House District 105.

All four will take questions after the opening remarks. The event is open to the public.

Information on the rally that will also be held on August 21st can be found at the No Common Core Maine website.
Posted by Unknown at 1:07 PM