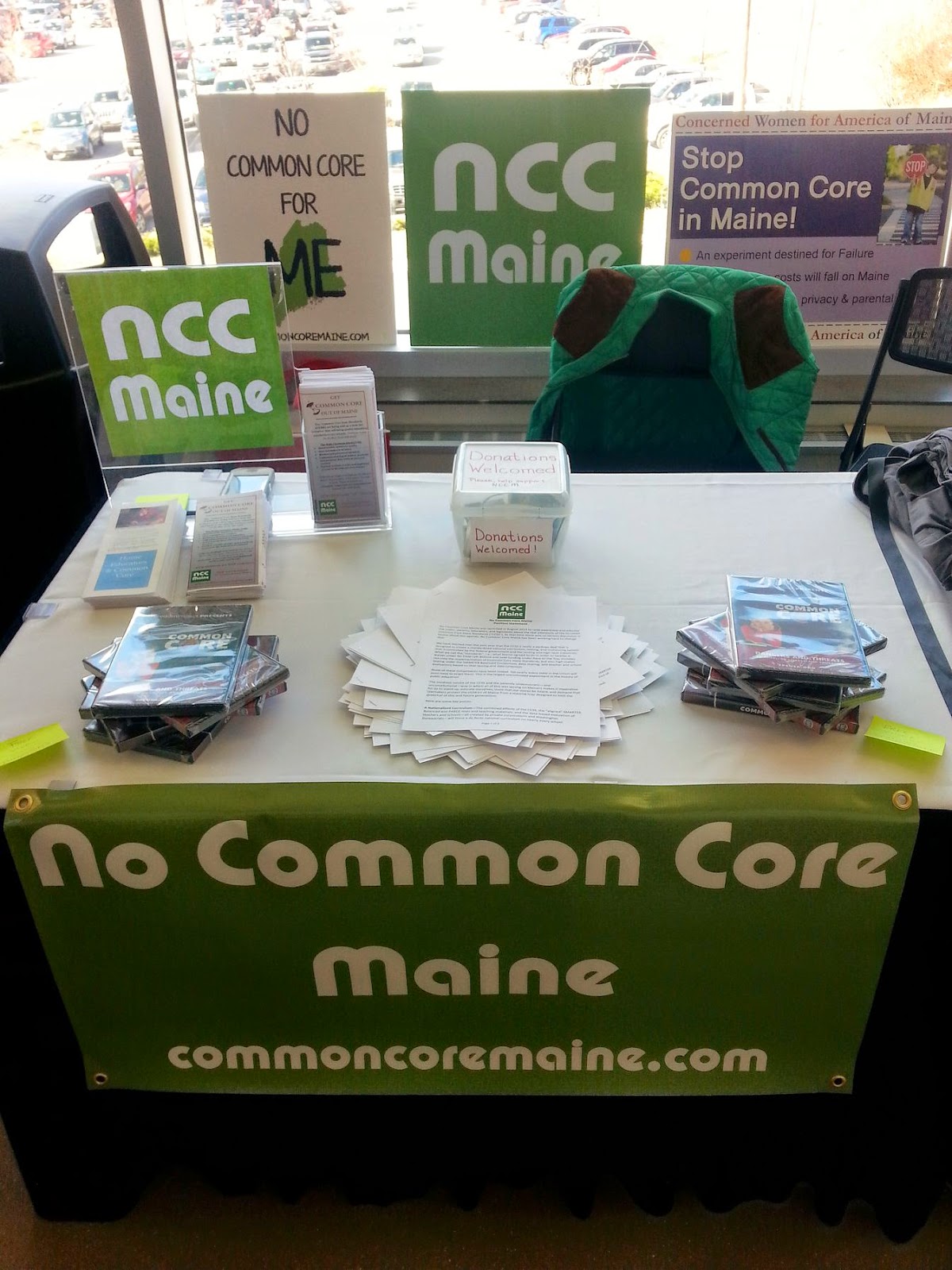 No Common Core Maine was launched in August of 2013 to raise awareness and educate the public, parents, educators, and legislators about the real intentions of the so-called Common Core State Standards (CCSS). At that time there was no serious discussion in Maine about this agenda. No Common Core Maine has been working hard to change that.

We have learned over the past year that the CCSS is really a package deal that is designed to create a standardized national curriculum, testing, and monitoring system that is controlled by the federal government and the testing and high-tech industries. What we call the "Standards", i.e., what Maine agreed to do in order to receive a waiver under No Child Left Behind and seek funding under Race to the Top, includes not only the Common Core State Standards, but also high-stakes testing under the SMARTER Balanced Consortium, data sharing, and teacher— and school evaluations based on that testing and data collection. Not a single element of these major reforms of our public schools has ever been tested.

Common Core is the largest uncontrolled experiment in the history of public education.

The insidious nature of the CCSS and the patently undemocratic and unconstitutional way in which all of this was sprung on Mainers makes it imperative for us to stand up, educate ourselves, insist that our voices be heard, and demand that lawmakers protect the children of Maine from a massive trap designed to limit the potential of our future generations.

Here are some key points:

Here's what the National Governors Association's, the same NGA that claims to have drafted the CCSS-Center for Best Practices had to advise states in 2009:

[S]tate efforts to improve student achievement should focus on workforce policies and practices, and on workforce funding decisions that improve the quality of the education workforce. To do this, governors should consider a comprehensive human capital approach that strategically invests in teachers and principals and that, in turn, can improve student outcomes.

In short, CCSS is built on the idea that Our Children are merely Human Capital to be used in a Global Labor Market where the elites determine what jobs need to be filled and whom to fill them.

Where Do We Go From Here?


It doesn't have to be this way. We can stop this coming train wreck by stopping the train now.

We need to strengthen local control by requiring training for school board members so they will understand their roles and responsibilities, and the differences between the functions of the board and the administrators. Many of us who have participated on school boards in this state have seen how board members become confused and intimidated by superintendents and other administrators who use state DOE pronouncements and questionable "research" to push a technocratic agenda that wastes the time and money of the community. Boards certainly should be respectful of the administrators, but their function is first and foremost to set policy for their districts. Board members deserve respect, and administrators and the public should understand and respect their role and not push agendas that usurp the board's rights and responsibilities.