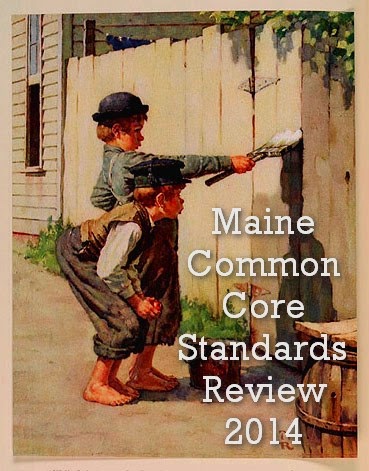 In August, Maine's Commissioner of Education, Jim Rier, announced the formation of a review panel to assess the state's learning standards for mathematics and English language arts. (The Maine DoE announcement)

The learning standards are, of course, the Common Core State Standards that Maine's Department of
Education quietly adopted in 2010. The panel was to be "comprised of parents, teachers, principals, superintendents, school board members, college professors and business leaders." The panel's task was to "to assess the rigor and clarity of the standards and offer specific suggestions for their improvement." The work was scheduled to take six weeks for a total planned review time of 24 hours.The review, however, was completed in about eight hours, and offered little if any serious criticism or suggestions for the learning standards. Such a fast review reflected serious deficiencies in the panel's composition, mission, and resources. Mr. Lentini sent the following letter to Governor LePage in protest:

As a member of the Maine Learning Standards Review Panel convened by Education Commissioner Jim Bier, I am writing to you directly to share my concerns that the Panel has not accomplished its task, and therefore, the Panel's conclusions may mislead the public as to the quality of Maine's learning standards. I believe the Panel's composition, objectives, and methodology all have been inadequate to accomplish its stated tasks.

At the outset, I want to be clear with you that Heidi Sampson and I are colleagues in No Common Core Maine, and we both share many deep objections to the Common Core State Standards and the other reforms that Maine undertook to join Race to the Top. Ms. Sampson also shared with me a letter she gave you describing her concerns and objections about this review. Nevertheless, while I agree with Ms. Sampson, my comments to you in this letter are my own.

When I accepted Commissioner Rier's invitation to join the Panel, I understood that a primary focus of the Panel's efforts would be to determine whether the current Learning Results for math and English-language arts, which are largely nothing more than the Common Core State Standards, were indeed the best standards for Maine as part of a review of the "clarity" and "rigor" of the standards. I also understood the Panel would be composed of a diverse group of people in order to answer this question fairly, that is, without undue influence from groups that are invested in maintaining the Common Core State Standards in Maine. I regretfully have concluded that neither has been the case.

Addressing the Panel's composition first, I noticed that of its twenty-four members, over two-thirds (seventeen) are either school administrators (nine), school board members (four are from the State Board of Education and one is from a local board). Others are employed by special interest groups, the Maine Education Association, Maine School Board Association, and the Maine PTA. Each of these groups has expressed a strong and active commitment to promoting Common Core in Maine (Ms. Sampson's positions notwithstanding). Two of the State Board members, Mr. Geiger and Mr. Pound, are also on the board of Educate Maine, an advocacy group supporting Common Core. Of the remaining seven Panel members, four are teachers and two are professors. Only one (myself) has no direct affiliation to an educational institution. I therefore have to question the Panel's impartiality, given that so many of its members are employed by, or affiliated with, groups that are committed to seeing the Panel endorse the current standards.

I appreciate that some might argue that Ms. Sampson and I have our own bias, since we've taken strong public stances against Common Core. I do point out that unlike those who are connected with groups that have commitments to Common Core, and even receive funding from pro-Common Core organizations (for example, the Gates Foundation provides grants to both the National Education Association and National School Board Association), neither Ms. Sampson nor myself receives any benefit for opposing Common Core. Indeed, we have no reason to reject reliable evidence and argument in favor of Common Core. On the other hand, as Sinclair Lewis famously pointed out, "It's difficult to get a man to understand something, when his salary depends on his not understanding it."

The prejudicial impact of this composition is very much evident when you understand that the Panel did not review the standards as a whole body. Instead, the Panel was divided into two groups based on subject matter, English-language arts and mathematics, and then further into subgroups defined by grade. Thus, at no time did the entire Panel consider the same standard. Instead, small groups of Panel members considered only portions of the standards. Given the large number of members who are affiliated with special interest groups supporting the Common Core, it's hard to avoid the likelihood that the Panel's findings will largely reflect the positions of those special interest groups. I think this point will become even more apparent when you consider the method by which the subgroups reviewed and voted on the standards, and the way the actual questions were presented to the members, as I'll now turn to.

According to the Department of Education's Web site [1], the Panel's task is to assess the "clarity" and "rigor" of the Maine Learning Results. No mention is made of assessing their appropriateness for Maine. (Commissioner Rier only addressed that question with the Panel verbally, and said we would not discuss how Maine adopted the Common Core originally.) The Web site also incorrectly claims that the standards were the result of a state-led and voluntary process. As Bill Gates himself explained in the Washington Post in June [2], the standards were developed privately under contract to the NGA and CCSSO and Race to the Top was designed specifically to coerce the states into accepting the Common Core. These facts alone should have made assessing the appropriateness of the standards for Maine a top priority.

The Commissioner and his staff explained that "clarity" meant, citing Webster's Dictionary, "the quality of being easily understood." "Rigor" was defined as "college-and-career ready" or "complexity". But the Panel never discussed the scope of these definitions in any way, let alone how they would apply to Maine. This left us considering "clarity" as nothing more than whether someone could understand the statement of the standard in a simple grammatical way. The whole point of the standard was left unknown. As far as I can tell, "college-and-career ready" applies equally well to a guaranteed early admission to Harvard as much as it would to getting wait-listed at one of Playboy's Top-Ten Party Schools.

Several members raised the concern that we were not considering developmental appropriateness. We never discussed that question, despite it's being a well-documented flaw in the Common Core Standards. Nor did we ever consider how the standards would apply to a non-collegiate track for students.

The method of deciding whether a standard met these requirements discouraged any serious discussion. Each standard was to be discussed and then subjected to a vote by "thumbs", which could be "up", "down", or "sideways". "Sideways" votes were taken as approving. "Thumbs down" votes opened discussion, but the hold-out was pressured to concede by having the option of "gifting" their support so the discussion could "move forward to consensus." The final vote was recorded as either a "0" (disapproval) or a "1" (approval). Combining this method of voting with the vagaries of the term definitions and the fact the composition of the Panel tended to give a 2:1 advantage to Common Core supporters thwarted any meaningful review of the standards.

Perhaps then it's no wonder that the Panel concluded its review in less than eight of the 24 hours scheduled for the review. My group, which reviewed the English-language arts standards for K-5, included State Board chair Peter Geiger and Heidi Goodwin, an administrator (literacy coach). In our sessions, Mr. Geiger quickly approved each standard, and Ms. Goodwin claimed that a teacher would understand the standard and use the correct materials. Thus, our votes reflected no serious intellectual agreement that the standards were appropriate for Maine, defined a path to "college-and-career ready" graduates, or were stated clearly in the context of those goals. The majority simply assumed those things were already true before even starting.

I hope this letter helps give you insight into how the Panel was formed and worked, and why I cannot support its conclusions. I would be happy to discuss any questions you have at your convenience.